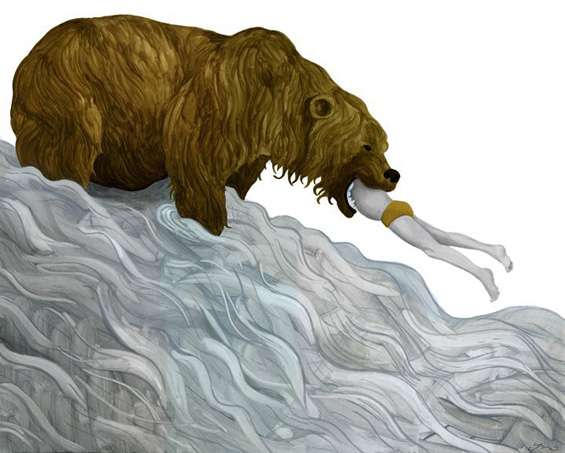 Jordan Sowunmi — May 26, 2011 — Art & Design
References: jorgemstudio & beautifuldecay
Share on Facebook Share on Twitter Share on LinkedIn Share on Pinterest
Boston-born artist Jorge Mascarenhas has always had a knack for illustrating. At the tender age of seven, he began selling a comic book to his classmates entitled 'Fernihas' (Little Beasts). After a few years abroad in Brazil and Mexico, Jorge Mascarenhas returned to the United States when he moved to San Francisco Bay and graduated from the prestigious California College of the Arts.

Jorge Mascarenhas' skill is palpable in his imaginative and detailed illustrations which alternate between fantastical, dreamlike images of a bear devouring an unfortunate swimmer or a bronco embracing a young girl, to images of nature battles like a snake wrapped around a bear, or a lion trapped in the middle of angry wolves. A personal favorite of mine is his portrait of Muammar Gaddafi with fangs sticking out of his mouth. Jorge Mascarenhas is able to stand out because his deft brushstrokes give each illustration an unmatched element of realism and danger.

Jorge Mascarenhas is represented by Levy Creative Management in New York, and his work has been featured in the New Yorker, Dell Magazines and Runners World.
6
Score
Popularity
Activity
Freshness
Get Trend Hunter Dashboard