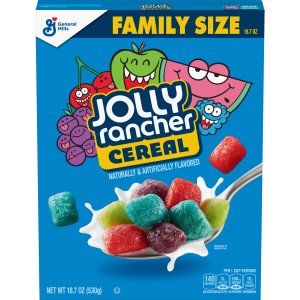 Katherine Pendrill — December 12, 2019 — Lifestyle
References: fox8 & chewboom
Breakfast is about to get a little more colorful with the debut of Jolly Rancher Cereal. Just as the name suggests, the new cereal is inspired by the popular fruit-flavored hard candies that consumers know and love.

The new Jolly Rancher Cereal is the result of an exclusive partnership between General Mills and Walmart. The cereal itself consists of crunchy cereal pieces in classic Jolly Rancher candy flavors, such as grape, cherry, apple, watermelon, and blue raspberry. The result is a colorful and sweet cereal that's sure to be a popular choice among kids.

Jolly Rancher Cereal will be available exclusively from Walmart stores for the next few months before becoming more widely available in March of 2020.