Houses of the Future 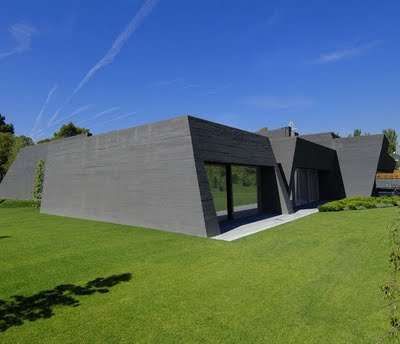 The dark gray concrete angled walls and immense green landscaping surrounding the abode give the totally angular home an underground and hidden-away appearance, despite being completely above ground.

Lighting is a central accent both inside and outside the house. The inside follows the angular pattern of the exterior both on the walls and furniture -- with oddly constructed kitchen counters, desks and staircases. Its modern design may seem impersonal to some, but this mansion has all of the flavor and excitement of any trendy modern home. In addition to a formal dining room, den and office, bedrooms and baths, the home has a screening room and underground parking garage.

A modern home such as this is unusual in Spanish culture, yet the bunkerlike abode is a luxurious hideaway for any appreciator of privacy and amazing architecture.
6
Score
Popularity
Activity
Freshness
View Innovation Webinars