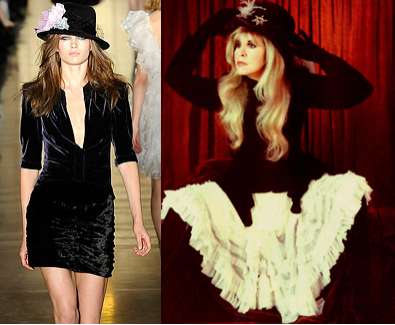 The first part of Jill Stuart’s Fall 2009 collection was a splendid sea of ink black couture, with leathers and velvets and a hint of delicate lace (it is in style, you know).

“In the latter camp was an ivory tailcoat on Marina Peres, worn, as most looks were, with a tilted fedora topped with lace flowers that immediately said: Bianca—Mick—wedding day,” Style.com said of Fall 2009 Jill Stuart runway show.

Jill Stuart introduced pastel flower toward the end of her show, but not without adding an edge to a few looks, like the wrist-length black rocker gloves paired with the flowing pastel mini.
4.5
Score
Popularity
Activity
Freshness
View Innovation Webinars