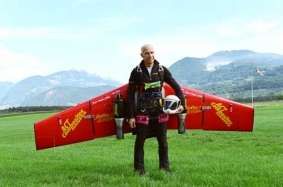 Jeremy Gutsche — August 19, 2006 — Autos
References: gizmag
Share on Facebook Share on Twitter Share on LinkedIn Share on Pinterest
This is flashback. In late 2003, a man named Yves Rossy took flight. Now that three years have past, why aren't we all flying? There have been a number of different innovations in personal flight, including birdman skydiving suits and rocket boosters you strap to your back. So far, none of them have been successful enough to become more than just the obsession of a few wild innovators. I can't wait to see what's next.

"Man has been attempting to fly for around 2400 years yet has only begun to master the process in the last century. In the history of flight, 2004 is shaping as a good year. One of the pioneers of human flight, Yves Rossy, recently achieved a landmark which went largely unheralded. Rossy's feats might well go down among the most daring as well as momentous in aviation history. Rossy made headlines in 2003 when he flew 12 kilometres for the loss of just 3000 metres of altitude, achieving his feat by jumping out of plane wearing three metre, carbon fibre wings." - Giz Magazine
5.1
Score
Popularity
Activity
Freshness
Attend Future Festival