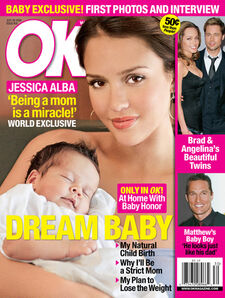 The latest edition of OK! Magazine, which hits news stands today, features Jessica Alba holding the baby she had with Cash Warren, daughter Honor Marie Warren. The photos made the cover of a magazine, supplemented by an interview with the actress inside.

In the magazine, Jessica revealed that the birth was a calm and peaceful, natural birth!

"The labor was more like meditation," she says. "I did yoga breathing. I was focused."

While the first photos of Angelina Jolie's new twins were worth an estimated $20 million, Alba's likely weren't anywhere near that high; however, they probably weren't cheap either. Since Alba's little one was born June 7, there have been about six weeks where paparazzi have been snapping shots of the Love Guru starlet and her new daughter.

"It hasn't totally sunk in," Jessica reveals to OK!. "She dreams, she smiles, and coos and does all these things, but she hasn't seen enough of the world yet to understand any of that stuff. So I still feel like she's connected to the other world, or something. There's no other way to explain it. It's a miracle."

So how long before Jessica gets her enviable abs back? Jessica revealed she plans to have her body in its fit form quickly, saying she was ready to skip on dishes like fried chicken and mashed potatoes. If she teams up with her personal trainer from her Sin City days, it shouldn't be long at all.
2.1
Score
Popularity
Activity
Freshness
Jeremy Gutsche Keynote Speaker