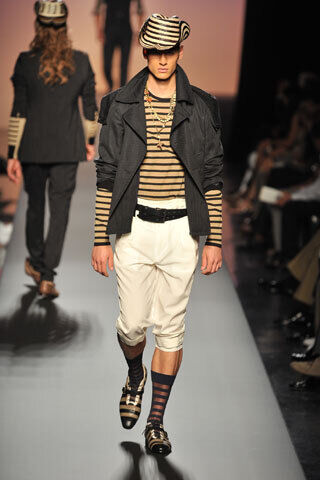 A recurring theme in the collection was bee or wasp-like stripes, sometimes showing up in ways in which they look as though they may have been inspired by a piano keyboard. A second theme was that of old Western movies, from tailored vests and pocket watch chains to cowboy hats and bandito bandannas around necks.

At one point in the show, it looked as though one of Gaultier's models couldn't get suited up in time, either that, or he was too sweaty to wiggle into his leather pants. The cowboy hat wearing model appeared on the catwalk wearing nothing below the waist but tiny, black, zippered briefs... even his feet were bare.

While some of JPG's works are a bit too out there, examine his Spring 2009 catwalk is a good place to turn for inspiration. As happens each season, fast fashion retailers like H&M are quick to copy some of the key looks and build off the themes seen on designer runways.