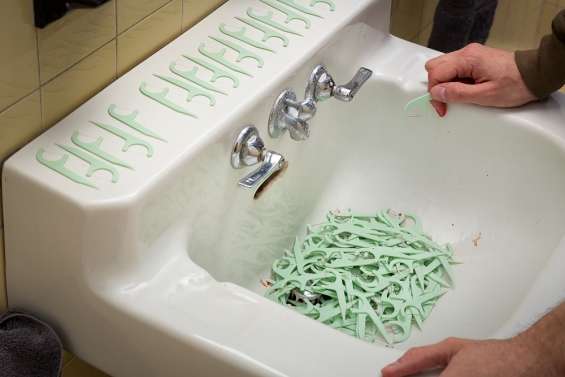 Meghan Young — July 4, 2013 — Lifestyle
References: johnwilliamkeedy & beautifuldecay
Share on Facebook Share on Twitter Share on LinkedIn Share on Pinterest
It's almost immediately apparent that the 'It's Hardly Noticeable' photo series tackles a serious issue despite the somewhat humorous imagery. It cleverly addresses an unspecified anxiety-based mental illness in which the protagonist indulges in obsessive behaviours on a rather dramatic scale.

Shot by John William Keedy, a photographer based in San Antonio, Texas, the It's Hardly Noticeable photo series raises the question of normalcy. As put forth by the artist's statement, "Through constructed tableaus and metaphorical still lifes, the series reveals the relationship between reality and perception, and highlights issues of pathology while questioning stereotypes of normalcy."

A powerful series, It's Hardly Noticeable focuses on surreal scenes to shake people's worlds up, even if for a moment.
6.3
Score
Popularity
Activity
Freshness
Get Better and Faster