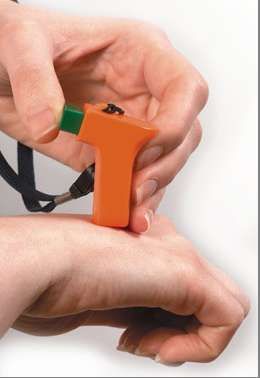 Everyone was told as a child not to scratch their mosquito bites. For the not-so-disciplined among us, there's a new gadget in town. For those who aren't fans of skin-bleaching anti-itch lotions or who doubt the effectiveness of aloe vera, there's an electronic way to relieve insect bite discomfort. This technie route involves zapping the itch out of mosquito bites by a mild current of impulses created by a piezo crystal.

Some of us are a lot more prone to attracting the blood-suckers, and when they bite, we swell or even welt. The itching can be excrutatingly irritating. Others just like having the latest gadget. It won't keep the vampires away, but it can help with post-puncture damage control, treating up to 1,000 bites. It doesn't need a battery and is small enough to carry in your purse.

They're sold at Amazon, so there's also the added benefit of checking out user reviews. Here's a sample, thanks to Janet Mortimer from the UK:

"Having been bitten to death recently on a yoga holiday in Corfu (morning and evening classes in grassy areas) I was so grateful to my husband for having sent me on my holiday with this wonderful gadget. It is strange to think that a painfree tiny amount of electricity can have such a magical effect on insect bites - the mosquitoes found all of us very tasty - a few clicks on the bitten area reduced the itching and you could see the swelling go down with each click. Most of the group thought it was a ridiculous idea until they saw the effects and then the only 2 things disturbing our peaceful yoga classes were the call to borrow "my clicker" and the clicking of my Zapperclick giving instant relief. Thank you for whoever invented it."