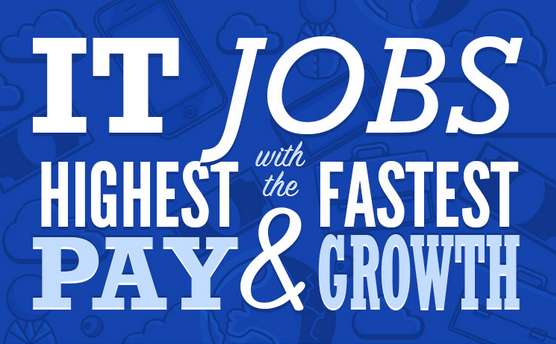 This Infographic Highlights IT Jobs with the Highest Pay and Growth

— June 14, 2013 — Tech
References: staff
Share on Facebook Share on Twitter Share on LinkedIn Share on Pinterest
This IT career salary infographic analyzes one of the newest and fastest-growing industries in the world today -- and, consequently, one of the highest-paid. The infographic, titled 'IT Jobs with the Highest Pay & Fastest Growth Rate,' reveals that iPhone application development jobs increased by 129% in 2012 alone. However, there aren't enough skilled individuals to fill these numerous positions, so these lucky application developers make, on average, $94,000 per year.

The infographic also tackles cloud-computing, declaring that a whopping 1.7 million cloud-related jobs went unfilled in 2012, meaning that the two out of three companies using cloud are desperate to find qualified, cloud-knowledgeable employees.

While most industries have been hurt pretty badly by the recession, IT job opportunities have actually increased, along with their salaries. This industry is indicative of the future, of the types of jobs that most people will be educated through university to fulfill. As of right now, however, the industry is growing so quickly that it needs as many qualified people as possible. Technology-savvy people should take this information and strike while the iron is hot. Not only will they be secure in their employment, but they'll be making six figures within a couple short years.
3.1
Score
Popularity
Activity
Freshness
View Innovation Webinars