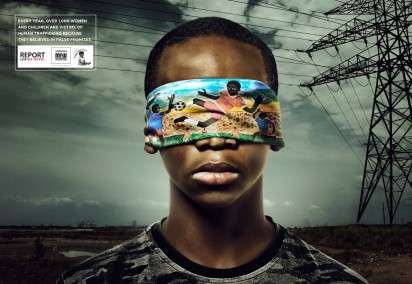 Meghan Young — April 16, 2012 — Marketing
References: ddb.co.mz & ibelieveinadv
It is frightening to think about how many victims of human trafficking were lured into their captivity by false promises; the Instituto Crianca Nosso Futuro ad campaign sheds light on this issue by taking the blindfolds off its audience's eyes. By bringing awareness to the world, this campaign also hopes to prepare potential prey, showing them that not everything is as it appears.

The Instituto Crianca Nosso Futuro ad campaign was conceived and executed by DDB Mozambique, an ad agency based in Maputo, Mozambique. It cleverly depicts the blinding false promises as actual blindfolds, which have been illustrated with the common lies told. Photographed by João Costa Funcho and Alexandre Marques, the ad campaign was illustrated by Silvio Pondja with art direction by Giuseppe Lira and creative direction by Lenilson Lima.
3.9
Score
Popularity
Activity
Freshness