Innovate Inside the Box

Cross-Pollinate Your Ideas
Next
Set of
Related
Ideas 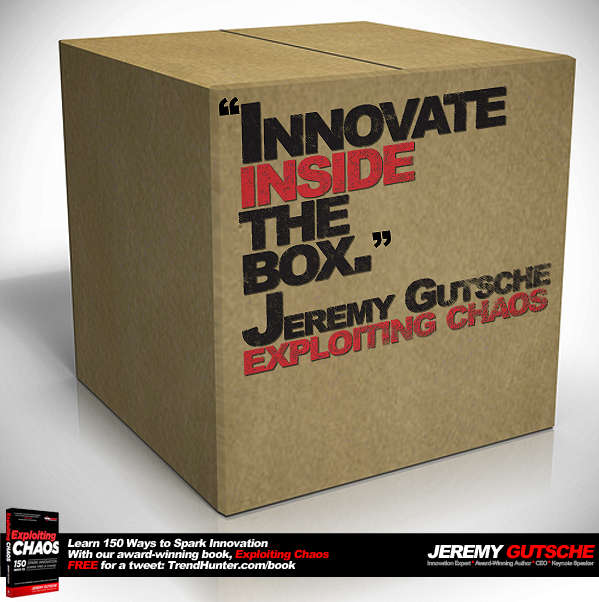 Jaime Neely — March 5, 2013 — Business
References: jeremygutsche
Share on Facebook Share on Twitter Share on LinkedIn Share on Pinterest
While the majority of people encourage businesses to think outside the box when innovating, Jeremy Gutsche's innovation strategy advice suggests thinking inside the box. The innovation keynote speaker believes that being put inside a box with limits on time or money does not need to stifle creativity. An infinite amount of time or resources does not necessarily make for a better end result. Restrictions and limitations actually force people to think differently and to be as creative as possible with what they have to work with.

Jeremy's award-winning book 'Exploiting Chaos' -- which you can read for FREE here -- explains this further with an example from Disney.

"When Michael Eisner took over Disney, the company was losing money. One of his first mandates was to assign a strict financial box to each Disney project. Employees were then challenged to creatively fit their ideas inside the financial box. Unfamiliar with such intense control, the creative people at Disney were skeptical (if not angry).

In the opening scene for the 1987 movie Outrageous Fortune, Shelly Long's character, Lauren, was supposed to visit her parents in their upscale New York City apartment to beg for money. The script involved just one scene with the parents, but it would require an additional set and actors to play the parents. Small details like this drive up the budget. To fit "inside the box," Eisner forced the writers to find a less expensive alternative. The result was that Lauren never enters an apartment at all. She buzzes her parents' intercom, but her mother won't open the door. She doesn't want to lend Lauren more money. Lauren pleads, and sneakily, the father drops an envelope from the second-story window. No set was required, and the scene was actually more effective. Using this sort of philosophy, Eisner grew Disney from a $2 billion market capitalization to over $60 billion."

Forcing teams to be creative within a box forces them to be particularly creative and innovative.
4.8
Score
Popularity
Activity
Freshness
Access Advisory Services