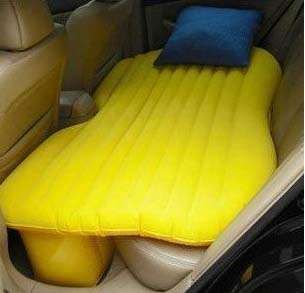 For anyone who has ever tried sleeping in a car, you're well aware that the accommodations are sorely lacking in the comfort department; the space is cramped, the seat belts dig into your side and it's hard to make use of the area where your feet would normally be if you were sitting. But, with the Inflatable Car Airbed, all those problems will just melt away.

The air mattress is designed strategically so that it covers the entire rear seat of your vehicle, so you never have to worry about being poked and prodded by those cumbersome seat belts while you sleep. And, best of all, it comes with an inflatable support section that fills in the empty foot section of the back seat so you get even more space to toss around in.

So the next time you're out of town and in desperate need of a place to stay, just pick up an Inflatable Car Airbed and make your car your crash spot.
6.6
Score
Popularity
Activity
Freshness
Get Trend Hunter Dashboard