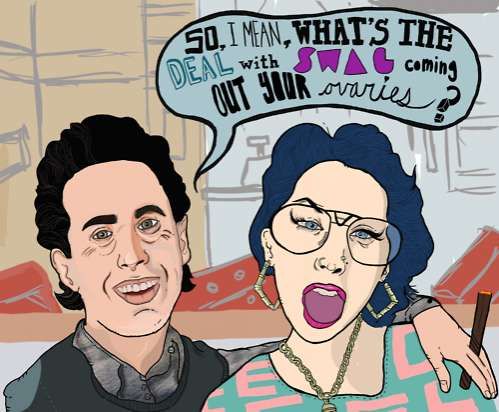 Marie C. Hudson — August 28, 2011 — Pop Culture
References: illdrawanything.tumblr & behance.net
Share on Facebook Share on Twitter Share on LinkedIn Share on Pinterest
If you've ever wondered what Tupac Shakur would look like as Spongebob Squarepants, you might want to check out the 'I'll Draw Anything' Tumblr. The photoblog is operated by Logan Fitzpatrick, a Brooklyn, New York-based art student, with the idea that he will draw anything requested of him, no matter how ridiculous, if it takes under 10 minutes. The blog has become a novelty among indie musicians and artists, with requests being submitted from Mark Hoppus of Blink 182 and Jacob Cooper of Wavves, to name a couple.

The 'I'll Draw Anything' Tumblr attracted a lot of attention when Fitzpatrick fulfilled a request from film producer Mike Rosenstein to draw rapper Kreayshawn with Jerry Seinfield, which is my personal favorite of the collection. The site is updated frequently with new submissions, and there's no telling what zany celeb combinations Fitzpatrick and his fans will come up with next.
4.2
Score
Popularity
Activity
Freshness
Get Trend Hunter Dashboard