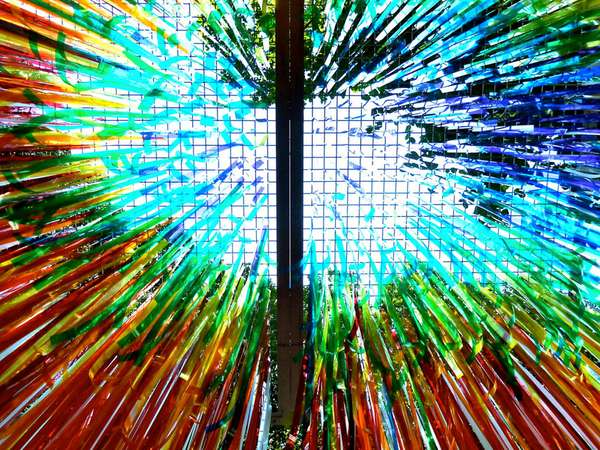 Souzan Michael — August 4, 2011 — Lifestyle
References: openhousegallery.org & designboom
Share on Facebook Share on Twitter Share on LinkedIn Share on Pinterest
In celebration of same-sex marriage finally becoming legal in New York, the ICRAVE + Z-A Studios Pop-Up Chapels were created and propped up, ready for couples to wed beneath them. Thus far, 24 same-sex couples have gotten married in one of the two chapels created by New York City architects ICRAVE and Z-A Studios.

On July 30th, 2011, the two chapels were setup as the winners of a design competition hosted by Architizer and The Knot. Each chapel was set up in less than two hours (a contest requirement).

KISS, the Z-A Studio design, is shaped like a Hershey's Kiss, with two walls that twist and turn into each other in a way that "symbolizes the ever-changing identity of the bride + groom/bride + bride/groom + groom as they get older."

The other chapel, by ICRAVE, featured a white mesh ceiling with dozens of multi-colored streamers hanging down, and the couple ties two ribbons together into a knot to symbolize their coming together and "tying the knot."

The ICRAVE + Z-A Studios Pop-Up Chapels are symbolic of both a beautiful union as well as a monumental time in New York's history.