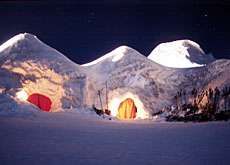 Bianca — January 6, 2008 — Special
References: iglu-dorf
Share on Facebook Share on Twitter Share on LinkedIn Share on Pinterest
While most people wouldn’t be ready to move up north to an igloo, many are enthralled by the idea of staying in an Inuit-style igloo for a shorter period of time. There is something about unique vacation experiences like that offered by the Iglu-Dorf (igloo village) that captivates the imaginations of young and old alike.

Unlike most ice hotels, you won’t have to go way up north to experience living inside snow and ice based architecture. There are five Iglu-Dorf locations in Switzerland and Germany which open annually between December and April. Swiss locations include Davos - Klosters, Engelberg - Titlis, Gstaad and Zermatt while the German location is found near Zugspitze, the highest mountain in Germany on the Austrian border.

All five igloos include plenty of captivating features, like events, shows, art exhibits, outdoor activities and winter sports. Those looking to overnight can stay in a traditional igloo or cozy up inside a romantic igloo, complete with private jacuzzi and champagne.

Fondue in an igloo? You bet! Cheese fondues traditional of the alps are served both inside the igloo villages as well as outside on the snow terraces. Follow dinner up with some cocktails at the igloo bar, and erase your guilt by burning off those calories the next day on an snowshoe tour.

Check out the video of the Zermatt location after the following 6 ice hotels.