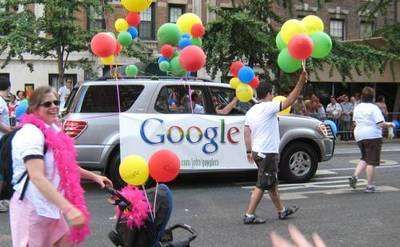 Ayman — November 5, 2008 — Social Good
References: latimesblogs.latimes & technology.timesonline
Share on Facebook Share on Twitter Share on LinkedIn Share on Pinterest
Google is caught up in a Prop 8 advertising scandal that has the owners of some famous sites pretty angry at the Silicon Valley corporation. Things are going particularly sour with Proposition 8, which seeks a ban on same-sex marriage, having successfully passed through. Many people think that these last-minute ads might have been the swinging vote.

So what’s the whole deal? Well, a day before the all important vote, the owners of popular sites like TechCrunch and Create Digital Music blogs were surprised when their Google ads displayed pro Proposition 8 messages that encouraged a ‘Yes’ vote on Prop 8.

A worse example is a gay car site that also received the same ‘pro prop 8’ ads through the Google Adsense network, even though the site has blocked all political advertising from it. According to the site owner, no political ads had previously ever appeared on his Google ads, due to a specific agreement with Google.

Peter Kirn, from Create Digital Music, also tried to use Google’s software to remove these offending adverts from the site and contacted Google directly about the issue. Finally, he removed the Google ads all-together from his site when the issue wasn’t solved.

And this is exactly where the problem lies. Even though Google publicly donated and supported a ‘No’ vote on Prop 8, this major mishap has many people questioning the integrity of its Adsense network.

“This is an extraordinary breach of trust we’ve put into Google ads,” Kirn said of the situation.

A Google spoke person added that “Google allows ads that advocate for particular political position, regardless of the views that they represent. We’re currently allowing ads advocating both for and against Proposition 8.”

Google confirms that they offer controls to ban and avoid ads that offend the hosting website from appearing. However, the reasons these controls did not work in this instance remain a mystery.