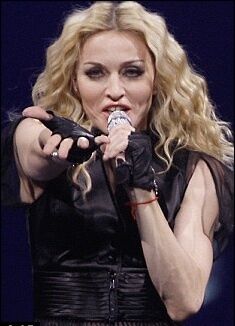 She introduced the song “Miles Away” at her Sticky and Sweet Tour concert in Boston, adding, “This song is for the emotionally retarded. You might know a few people who fall into that category--God knows I do.”

Madonna using the stage as a place to insult people she takes issue with is nothing new.  After all, she has used it to heckle Sarah Palin by announcing she’d like to kick the GOP vice presidential nominee’s backside, and she also dedicated “Like a Virgin” to the Pope last September.  However, humiliating people that she knows personally is a new move, even for the Material Girl.

Most psychologist think bad-mouthing ex-spouses should not be done in front of children because it isn’t healthy, so I think bashing one’s ex in front of millions of fans--and their videocameras--definitely falls into that category. Check out the above video of this moment as captured by a fan in the audience.
1.4
Score
Popularity
Activity
Freshness
Attend Future Festival Virtual