Top 25 Travel Ideas in June
Next
Set of
Related
Ideas 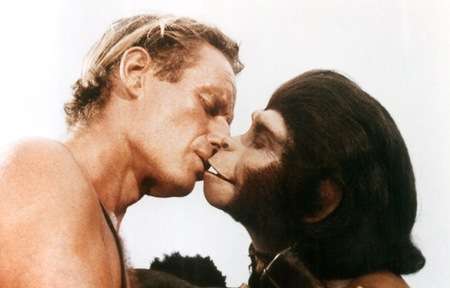 Was Planet of the Apes for Real?

It turns out, well, very close! A recent skull finding in Romania proves that homo sapiens did in fact get it on with their more ape-like cousins, the Neanderthals.

And apparently, the phenomenon of interbreeding or, as its called in the scientific world, “hybrid speciation” is quiet common. Advances in DNA testing, are now allowing scientists to trace the parental roots of every species on earth. The findings -- well there was a whole lot of hanky panky.

Animals were generally thought to evolve the opposite way, when a single species gradually splits into two over many generations. But according to biologist James Mallet of University College London, this phenomenon of interbreeding, once considered a “sexual blunder” turns out to be a major force in the evolution of life on earth.

Think of a nectarine: half peach, half plum, super delicious. It seems nature has been quite in favor of a little sexual experimentation. Hybrid speciation is far more common than anyone thought, marking a major change in evolutionary theory.
3.6
Score
Popularity
Activity
Freshness
Attend Future Festival

30 Beastly Bigfoot Inspirations
Real or Not, the Abominable Snowman is Alive and Everywhere