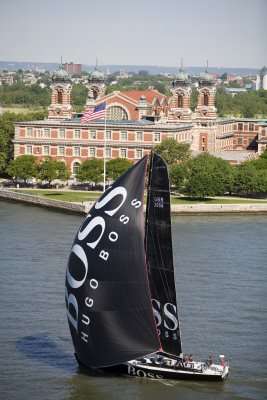 Bianca — October 3, 2007 — Luxury
References: alexthomsonracing & luxist.de
Share on Facebook Share on Twitter Share on LinkedIn Share on Pinterest
The luxury Hugo Boss yacht is one of the most opulent sailboats afloat. The designer held a lavish ceremony in Hamburg, Germany to celebrate the official baptism of the "HUGO BOSS" sailing yacht. Complete with light, laser and pyrotechnic show, the festivities took place in one of the city's famous fish auction halls, bringing with it about 600 nation and international guests.

The yacht is over 20 meters long, has a 27 meter mast and boasts and elegant black sail. The new Boss boat is lighter and more agile than its predecessor, which was sailed by British skipper Alex Thomson in the VELUX 5 Oceans Regatta in 2006.

Hugo Boss AG have been participating in sailing competitions since 2003, supporting 33 year old Thomson in reaching his goals. He'll be entering the Barcelona World Race in November 2007 followed by VendÃ©e Globe in 2008, which will see the young Brit sail the new "HUGO BOSS" solo around the world.