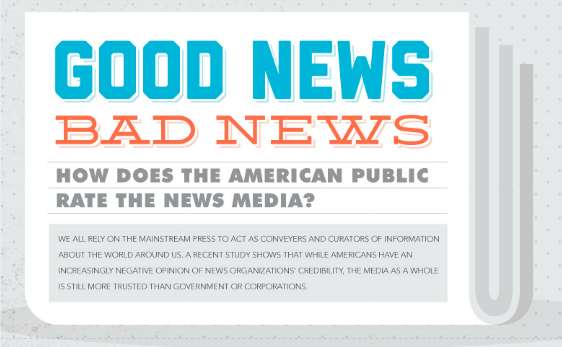 Jennifer Gosnell — June 13, 2012 — Pop Culture
References: holykaw.alltop & awesome.good.is
Share on Facebook Share on Twitter Share on LinkedIn Share on Pinterest
The 'How Does the American Public Rate News Media' infographic displays a weakness in one of the most fundamental assets of news organizations: trust. News is only effective so long as people believe what is being reported. For starters, an overall increase has occurred in the widely held beliefs that powerful people manipulate what is being reported, articles are biased, and often the news can be inaccurate.

From 1985 to 2011 an increase from 23 percent to 42 percent of people believe that the way that news is being reported is actually hurtful to democracy and "too critical of America". However, when you break down whose beliefs these are mostly representing, while there has been a general increase in all categories, Republicans are found to be the most skeptical of news organizations, followed by Independents. Cited as the biggest perpetrators of these negative influences are CNN and Fox News -- representatives of opposite sides of the political spectrum.
1.1
Score
Popularity
Activity
Freshness
Attend Future Festival