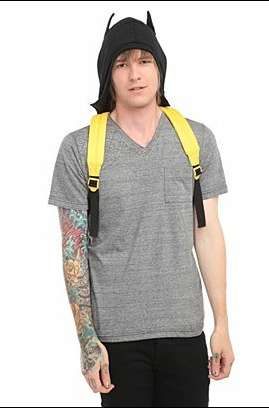 The Hooded Batman Backpack is Both Nerdy and Protective

Somewhere between costume and functionality, the backpack is definitely creative and sure to turn heads. Because the Batman franchise itself is so old, the bag has a definite retro feel and a ton of character. Certainly less intimidating than the superhero who inspired it, this is an extremely playful way to integrate fandom into one's wardrobe. Just in time for the impending 'Dark Knight Rises' premiere, this is sure to sell out with many patiently waiting fans. Though the bag may not protect you as well as Batman himself, this could arguably act as somewhat effective rain gear.

Sure to appeal to Batman enthusiasts of all ages, this is a well-timed and clever piece.
3.9
Score
Popularity
Activity
Freshness
Access Advisory Services