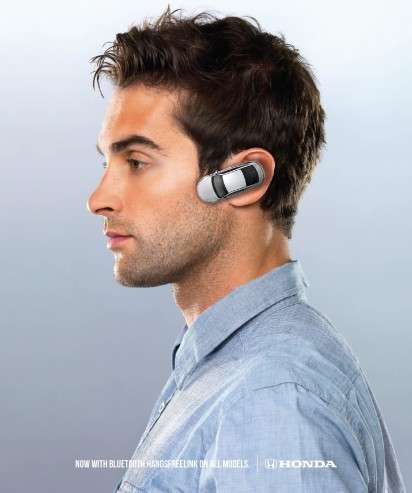 The Honda Bluetooth Handsfreelink Campaign is Simple and Surreal

Meghan Young — January 29, 2013 — Autos
References: draftfcb & ibelieveinadv
Share on Facebook Share on Twitter Share on LinkedIn Share on Pinterest
The Honda Bluetooth Handsfreelink campaign takes this added technological perk a little bit too literally. The car itself has been downsized considerably to mimic the common wireless earpieces many people, especially businessmen, used to rock a number of years ago. Nevertheless, it does depict the evolution of handsfree devices quite nicely.

Conceived and executed by DRAFTFCB, an ad agency based in Puerto Rico, the Honda Bluetooth Handsfreelink campaign reads, "Now with bluetooth handsfreelink on all models." Art directed and copywritten by Harold Jessurun with creative direction by Ricky Soler, the ad campaign is simple and to the point. It visualizes just how handy this Bluetooth integration is going to be for drivers, both men and women.
2.3
Score
Popularity
Activity
Freshness
View Innovation Webinars