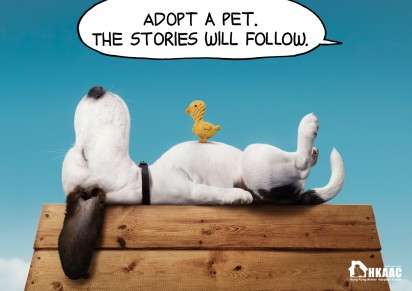 Meghan Young — May 16, 2012 — Lifestyle
References: leoburnett & ibelieveinadv
The HKAAC Animal Adoption Centre ad campaign features a clever, creative and ultimately cute approach to encourage people to adopt a new member into their family. Instead of focusing on the shelter animals themselves and their sad, homeless existence, this campaign centers around the experiences people will have with a loving pet by their side.

Created by Hong Kong-based ad agency Leo Burnett, the HKAAC Animal Adoption Centre ad campaign likens adopted pets to iconic animal characters such as Garfield and Snoopy. By bringing these cartoons to mind, it reminds people how quirky, life-changing and entertaining animals can be.