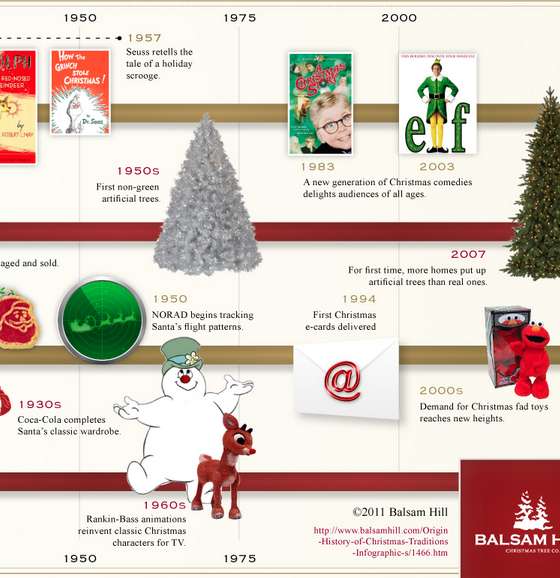 This Chart Details Key Moments in the Evolution of Christmas

Jonathon Brown — December 12, 2012 — Special
References: balsamhill
Share on Facebook Share on Twitter Share on LinkedIn Share on Pinterest
With all the shopping, eating and drinking that comes with the holidays, it's easy to forget the history of Christmas. It is likely that many of us probably never knew it to begin with. This infographic can help give some context to this beautiful time of year.

In the fourth century, there was a Greek Bishop named St. Nicholas who used to give gifts to the poor. This is where the nickname "Old Saint Nick" comes from originally. In the 1600s, the myth of "Father Christmas" was born and by the 1860s Santa Clause appeared the way we know him to look today: fat, bearded and jolly.

According to the history of Christmas infographic, the Twelve Days of Christmas song was first published and by the year 2000, demand for children's fad toys reached all time highs.
2.1
Score
Popularity
Activity
Freshness
Attend Future Festival

Shopping Reaction Infographics
How Did Shoppers Feel About the Black Friday 2012 Shopping Frenzy?