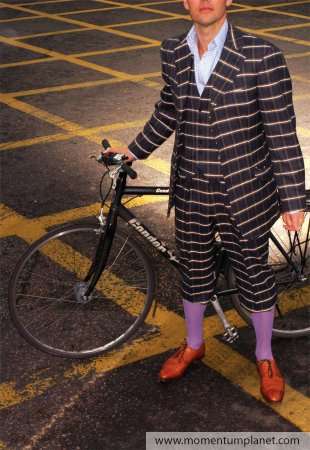 Pedaling Into The Urban Future In Eco Style

Jocelyn Lee — February 11, 2009 — Lifestyle
References: images.google & images.google
With the rise of gas prices, more urban dwellers are choosing to cycle to work and play. Rather than wearing purely spandex and traditional cycling gear, urban cycling comes with the opportunity to become fitted in fashionable, functional clothing. A number of others are throwing together their own cutting edge outfits to accommodate being seen by others while pedaling the busy streets.

Bike messengers, also known as cycle couriers, have played a major role in the invention of cycling fashion. They tend to wear skinny jeans or cropped pants with messenger bags and a type of belt that is similar to the purpose of a fanny pack.

There is no doubt that the cycle culture sends signals of elitism. A certain type of pride comes with the feeling of riding a thousand dollar bike outfitted in clothing and gear that is worth up to five hundred dollars. The cycling crowd in another sense have pride because they save money and create less carbon emissions in the environment. On the other hand bike trendiness can be as pricey as high fashion.
3.1
Score
Popularity
Activity
Freshness