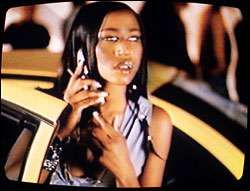 Greg Ponesse — April 7, 2006 — Business
References: villagevoice
Share on Facebook Share on Twitter Share on LinkedIn Share on Pinterest
It all began with Run-D.M.C. In 1986, the Queens-bred kings of rap bumrushed Madison Square Garden with their sold-out "Raising Hell" tour. Russell Simmons had urged the group to record a song extolling the virtues of Adidas, their favorite sneaker brand. The result was a Top Five r&b record, "My Adidas"â€”most recently included on Run-D.M.C.'s Greatest Hits, out this week on BMG Heritage. At one point during the show, Run stopped the music and asked everyone to take off a shoe and raise it to the ceiling. The sold-out arena swelled with the sweet smell of freshly purchased, shell-toed Adidas. The always prescient Simmons made sure Adidas executives were on hand to see the impact of product placement in a hip-hop song. To the executives in attendance, the room reeked of funky marketing possibilities.
"We didn't know the representatives from Adidas were there," says
4
Score
Popularity
Activity
Freshness
Jeremy Gutsche Keynote Speaker