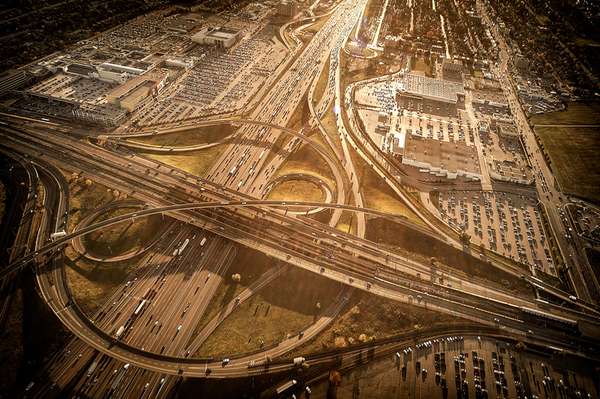 Andrew Loh — October 16, 2011 — World
References: peterandrew & photographyserved
Share on Facebook Share on Twitter Share on LinkedIn Share on Pinterest
Highway Interchanges by Peter Andrew captures the beauty of construction from a birds-eye perspective. It's hard to tell the shape of a highway from the ground, but Andrew manages to give a whole new viewing pleasure to these massive blocks of concrete.

Specializing in aerial photography, talented Canadian photographer, Peter Andrew takes viewers on a tour around the North American cities of Montreal, Quebec, Phoenix, Arizona and his hometown of Toronto, Ontario, to view spectacular highway interchanges from above the sky.

In Highway Interchanges by Peter Andrew, viewers are introduced to several types of freeway junctions in the United States, which are designed by the transportation engineers. The four-way, four-level stack interchange and cloverleaf interchange are among the various designs depicted in the series of pictures, which to some extent, also resemble crop formations.
5.6
Score
Popularity
Activity
Freshness
View Innovation Webinars