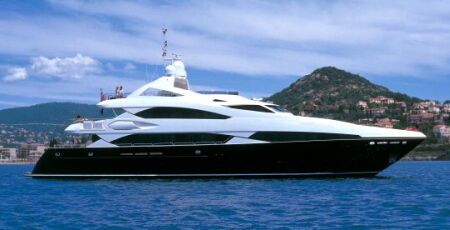 Sunseeker Yachts in Quantum of Solace

Pearl — October 14, 2008 — Pop Culture
References: sunseeker & luxist
Share on Facebook Share on Twitter Share on LinkedIn Share on Pinterest
James Bond films are never complete without the high speed chases. James Bond: Quantum of Solace will have one of the most intense boat chases on any 007 movie. Three high performance yachts from UK company Sunseeker are featured in the film, including the Superhawk 43 and the 121-ft (37 m) M4 behemoth (seen in the image above).

The latter super yacht is the largest semi-custom luxury yacht ever built in the UK. An older model, one Sunseeker’s first open-cockpit speedboats (the Sovereign 17), built in 1970, also appears in the film.

The James Bond: Quantum of Solace release will be the fourth consecutive appearance for Sunseeker luxury yachts. The boat chase sequence was filmed in Panama in March 2008. It took 3 months of preparation and the involvement of over 100 support boats.
5.3
Score
Popularity
Activity
Freshness
Access Advisory Services