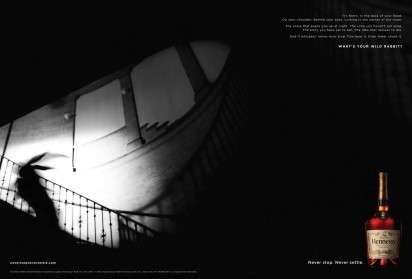 The Hennessy 'What's Your Wild Rabbit' Campaign Urges Never Give Up

Meghan Young — April 7, 2012 — Marketing
References: droga5 & ibelieveinadv
Share on Facebook Share on Twitter Share on LinkedIn Share on Pinterest
The Hennessy 'What's Your Wild Rabbit' ad campaign encourages people to never settle. Although it is clearly asking people to always choose the better liquor -- in this case Hennessy -- it also sends a much stronger message by urging people to follow their dreams and to never give up. It does so by capturing some of the most successful people in various industries: Manny Pacquiao, Martin Scorsese and Erykah Badu. Each of them are haunted by the shadow of a rabbit, which represents their own wild rabbit.

Conceived and executed by Droga5, an ad agency based in New York, United States, the Hennessy What's Your Wild Rabbit ad campaign was art directed by Alexander Nowak. A dramatic campaign to say the least, it associates this liquor with perseverance, happiness and even success.