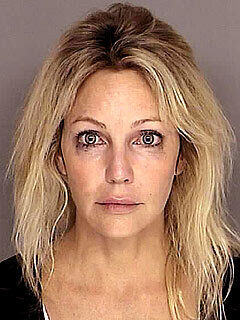 It is pleasing to see them as they really are, without the help of their make up artists and stylists. They're really not that different from us when you see them like this, are they?

The gallery includes an image of Heather Locklear's recent DUI shot as well as one of Mel Gibson who was arrested for drunk driving in 2006 and comedian Nick Nolte for the same charge.

No comments are needed on the Hugh Grant and Divine Brown shots, but Matthew McConaughey, who was busted for drugs after police found him dancing naked while playing the bongo drums, needs to be recognized. He is me hero!

In 2002, the Santa Barbara County Sheriff's Department did not make Michael Jackson look too great. The Daddy of funk George Clinton gets bonus points for his awesome hair. Axl Roses has neither guns nor roses after his arrest and the image of James Brown is really shocking, a million miles away from his normal jazzy suits. The archive mug shot award goes to Tim Allen for a shot dating back to 1979.
3.9
Score
Popularity
Activity
Freshness
Get the 2021 Trend Report FREE