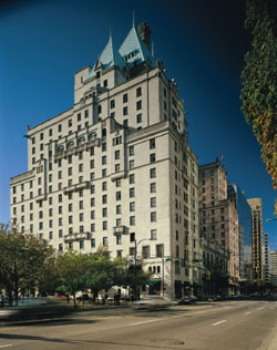 Coincidence or not, many of the accommodations are actually luxury Fairmont-owned hotels which were built in the 1800s for the Canadian Pacific Railway.

Here’s the guide to the hotels in the gallery, along with their respective ghost stories:

A lady in a red dress wanders the halls of the 14th floor and on an unseen ledge. The elevator also has been known to make unrequested stops on that floor.

This fantastic hotel has two ghost stories. The first is of a visiting ghost of a bellman in uniform. The second involves a ghost of a bride, wandering the halls in her wedding gown. The unfortunate girl is said to have fallen to her death down the grand staircase in the 1920s.

As the last working gallows in Canada accommodations here are highlighted with an event the owners call “Party with the Ghosts.” The guest spirits are those of prisoners who died in the jail house.

The sounds of a murdered female employee’s head banging as she was dragged down three flights of stairs can sometimes be heard here. She was eventually cut in pieces and burned in the furnace, which is still in use.

The second flood is the hub of the haunted action at the Fort Garry. Reportedly a woman in a white ball gown, or a cloaked figure stands at the foot of the bed in room 202. There are also stories of trickling blood on walls, strange lights and noises, all on floor number 2.

I believe this hotel is still closed due to the 2004 murder of the owner. The northern hotel also has a female ghost named Bessie Gideon. She has been seen in windows and banging on floorboards on the third floor.

This is hotel has a particularly interesting mystery. Rumors have a grand Crystal Ballroom hidden on one of the penthouse floors. The room remains unseen--it has been closed because it does not meet fire regulations. However, complaints of shaking chandeliers, loud music and people talking have been reported from the floors below.

A hidden door behind the front desk is the only access to and from the building’s basement. Occasionally, knocking has been heard coming from the other side of a door, but when it’s opened, nothing is there. The hotel basement is said to have been a morgue at one time.

While on a journey to Europe in 1912 Charles Melville Hays, a general manager at CPR drowned in the sinking of the Titanic. He was overseas selecting furniture for the new hotel’s dining room. Hays and some of his men are said to haunt the Chateau to this day.

It has been reported that ghosts are seen in rooms and even sometimes right in the hotel beds. The ghost is of a woman in a nightgown with long hair.