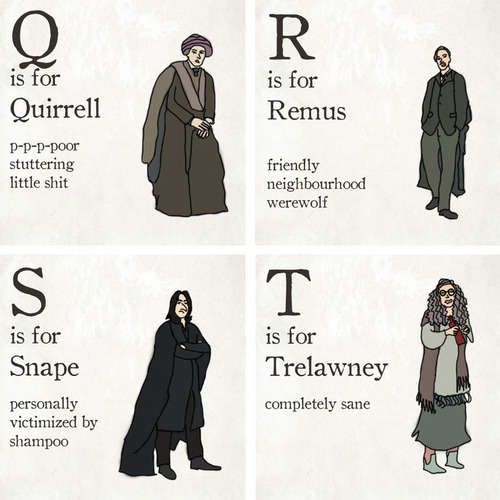 — June 12, 2013 — Pop Culture
References: thefox-andthehound.tumblr & laughingsquid
Share on Facebook Share on Twitter Share on LinkedIn Share on Pinterest
Illustrator Samantha Esther's hilarious Harry Potter Alphabet is the perfect way to introduce new Harry Potter readers to J.K. Rowling's slew of fantastic characters, and for old fans to reminisce and giggle at the many inside jokes contained within these 26 mini illustrations.

Everyone from Voldemort to characters barely mentioned in the novels are featured in this alphabet. Some of the most sarcastic descriptions include those of Snape, Fred and Voldemort. Poor, misunderstood Snape is described as being "personally victimized by shampoo." Fred Weasley's description is much shorter and simpler, but extremely accurate: "F is for Fred. Dead, dead, dead." Finally, Voldemort is described as being "okay once you get to know him."

Samantha Esther's sarcastic quips, combined with her goofy cartoonish drawings, make for a hilarious tribute to one of the greatest children's literature icons of our time.
4.3
Score
Popularity
Activity
Freshness
Get the 2021 Trend Report FREE