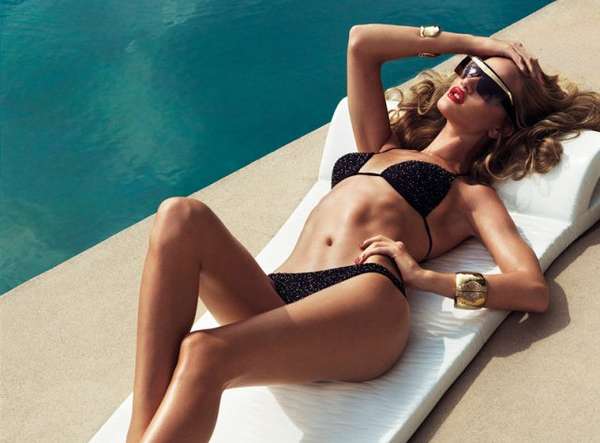 Marriska Fernandes — December 13, 2011 — Fashion
References: harpersbazaar & fashiongonerogue
There is a certain superstar who has done it all—modelling, acting and lingerie -- and this stunning star is the fab Rosie-Huntington-Whiteley, who graces the glossy pages of the Harper’s Bazaar UK January 2012 issue.

In spite of her acting fame, the Victoria’s Secret Angel proves that modeling is her best talent as she sizzles away in figure-hugging dresses and swimsuits. Her recent appearances on several hot high-fashion covers like Harper’s Bazaar, Vogue and many more prove that she will always be a woman of many talents.

In hot-red lips and sleek blonde hair, this beautiful bombshell is certainly the model of the year who has bagged the most awaited magazines and films of the year. Captured by Tom Munro, the dazzling bikini poolside captures in the Harper’s Bazaar UK January 2012 issue sure kick the new year in with a splash.
6.2
Score
Popularity
Activity
Freshness