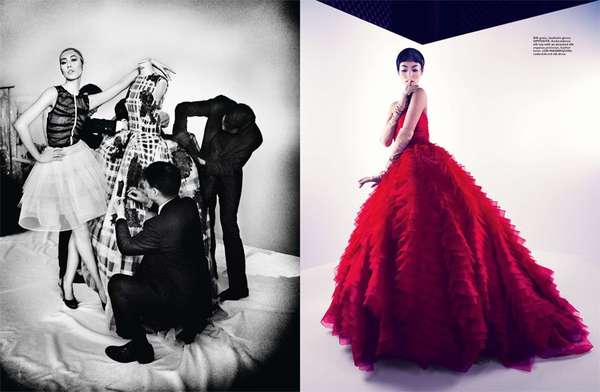 Meghan Young — May 23, 2012 — Fashion
References: facebook & fashiongonerogue
Showcasing select pieces from the Dior Haute Couture collection, the Harper’s Bazaar Singapore June 2012 editorial is utterly glamorous. Nevertheless, while the photos look as though they were inspired by Old Hollywood photography and films, there is a modern edge to each that is hard to deny. From headbands to kimono-like blouses, the outfits blend two generations together beautifully.

The Harper’s Bazaar Singapore June 2012 editorial was captured by photographer GT Gan. Shot in Shanghai, China, it stars model Liu Wen. The Chinese beauty was flawlessly styled by Kenneth Goh, who was tasked with the job of "celebrating the voyage of couture going from Paris to China," as written by Fashion Gone Rogue. The elegant ensembles were perfected with a sleek cropped hairdo and smokey eyes by beauty artist Greg O.
6.7
Score
Popularity
Activity
Freshness