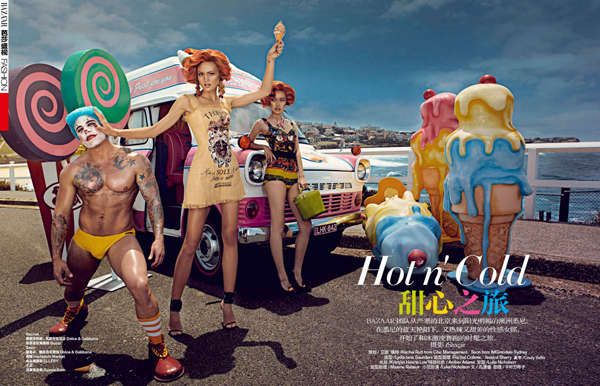 Meghan Young — May 30, 2013 — Fashion
References: bazaartrends.cn & fashiongonerogue
Share on Facebook Share on Twitter Share on LinkedIn Share on Pinterest
The Harper’s Bazaar China 'Hot n' Cold' editorial focuses on one of the best things about summer: the return of the ice cream truck. Giving it a high fashion twist, the theme is incredibly edgy, feminine and surreal. From the use of giant ice cream and milkshake props to vibrant curly coifs, it is almost as though models Rachel Rutt and Seon, as well as their blue-headed bodybuilder driver, travelled from a strange candy-filled land for the photoshoot.

Lensed by photographer Shxpir on location by the beach, the Harper’s Bazaar China 'Hot n' Cold' editorial appeared in the April 2013 issue of the magazine. The beauties were outfitted by stylist Lydia-Jane Saunders, who put together a colorful and eye-catching feminine wardrobe featuring the likes of Louis Vuitton, Burberry Prorsum and Stella McCartney.
6.4
Score
Popularity
Activity
Freshness
Attend Future Festival Virtual