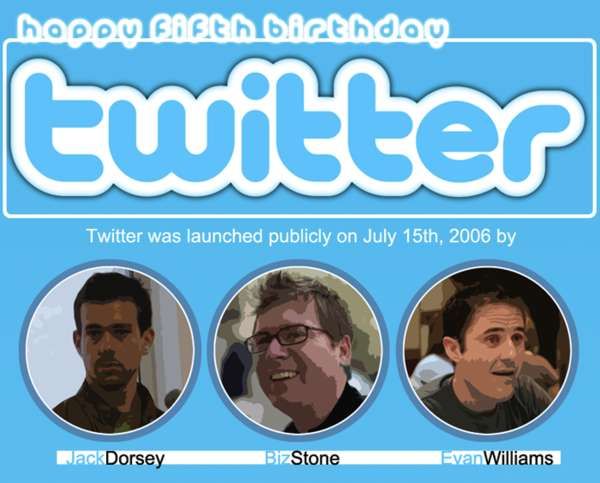 Corinne Guirgis — August 11, 2011 — Pop Culture
References: viralms & holykaw.alltop
Share on Facebook Share on Twitter Share on LinkedIn Share on Pinterest
Twitter turned 5 years old this past July, and the Happy Birthday Twitter Infographic clebrates the rise of the micro-blogging site with some of the most compelling, behind the scenes statistics on the social media giant. Founded in 2006 by Jack Dorsey, Bill Stone and Evan Williams, Twitter's rise to the top of the Internet ranks was not a total surprise, but the magnitude of it its success was unimaginable.

At 2 million users and 350 million tweets per day, the site connects the world in a way unlike any other social tool on the Web. The graphic goes so far as to chart the site's revenue and estimated value as well as the most active Twitter moments and even the global influence of the site with regard to social uprisings and revolutions in the middle east.

Implications - Social media has drastically changed the way humans interact on a daily basis across the globe. Information that was once restricted by international boundaries and borders is now available to anyone with the stroke of a keypad, heightening international relationships in both a personal and professional way. Essentially, this is a shift in the way consumers communicate and should serve as a sign to business to get familiar with blogging.
4.3
Score
Popularity
Activity
Freshness
Access Advisory Services