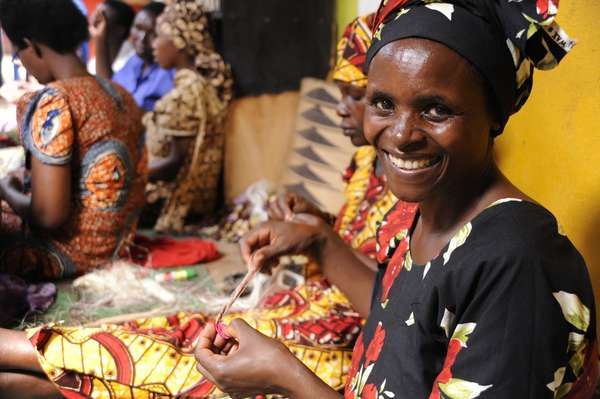 'Hands Up Not Handouts' Uses Business for Positive Change

But don't be fooled, Hand Up Not Handouts isn't all buzz and no bite. In the words of founder Tess Sager, "charity sucks." Citing unsustainability and negative stereotypes toward women in the Majority World, Sager founded the company to help women earn a stable income through traditional handicraft production. The positive consequences of female-earned wage is unparalleled in terms of established measures of development -- economic, social and human. With more earning power, women in the Majority World are better able to feed their families, send their children to school and access safe health care services.

By partnering with artisans in Rwanda (Agaseke and Gahaya Links Women’s Cooperatives) and Palestine (Qalandia Women's Cooperative, West Bank), each piece is intricately crafted for the market in the Western world. When Sager first visited Palestine a few years before she founded Hands Up Not Hand Outs, she noticed that many women designer's embroidered pillowcases and tablecloths went to waste because they would sit unsold. But by making the designs appealing to Western tastes, there is more opportunity for the accessories to sell, which in the end, allows the women to make more money.

In many ways, Hands Up Not Handouts signals a mainstream shift in business principles from one solely based on profit to one that incorporates social change into its mission, mantra and message.