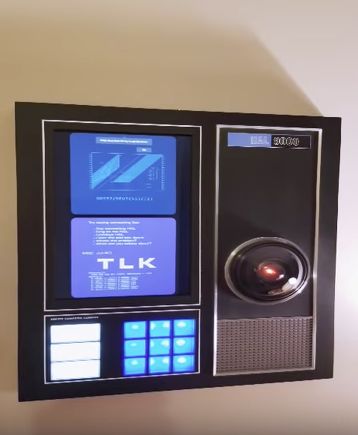 An Alexa-Integrated HAL-9000 is Now a Terrifying Reality

Justin Lam — March 13, 2018 — Tech
References: cnet & digitaltrends
Share on Facebook Share on Twitter Share on LinkedIn Share on Pinterest
The HAL-9000, from Stanley Kubrick's opus '2001: A Space Odyssey,' has finally become a reality thanks to the work of Master Replicas Group. This recreation of the iconic AI is incredibly faithful to the film original and was created using the official consumer product licensing from Warner Bros. Aside from being a collector's piece, the recreated HAL-9000 features full Alexa functionality in an amazing and terrifying way.

The entire system is powered by a Fire HD tablet, found in the replicas base, and utilizes Amazon's voice assistant to some extent. Currently, the device can only respond to wake-up calls with lines from 2001: A Space Odyssey, but Master Replica's Group is hoping to introduce HAL's voice to answer inquiries. No price for the HAL-9000 has been given, but Master Replicas will be taking pre-orders in April 2018 and will be launching a Kickstarter campaign.
0.8
Score
Popularity
Activity
Freshness
Get the 2021 Trend Report FREE