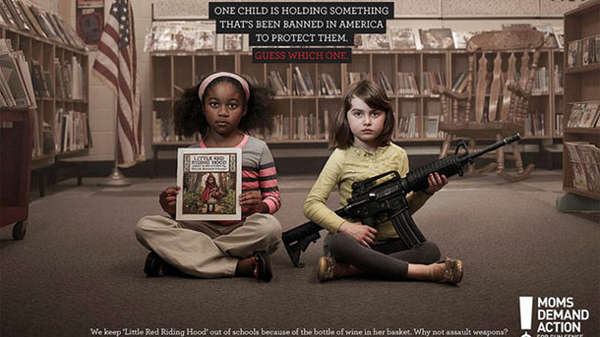 Nicole Kahansky — April 22, 2013 — Pop Culture
References: news.yahoo
Share on Facebook Share on Twitter Share on LinkedIn Share on Pinterest
Gun control in the United States is a hot topic amongst the general population as well as politicians. The most recent shooting at Sandy Hooks Elementary School has put the gun control debate at the forefront of everyone’s mind. A day after the tragic shooting, Shannon Watts founded 'Mother’s Demand Action,' which is a group that pushes for stricter gun control laws in American by raising awareness, holding rallies and speaking with government officials.

Most recently, the group came out with a powerful advertisement that showcases two children, one holding a gun, and the other one holding the classic Little Red Riding Hood book. The advertisement reads, “One child is holding something that’s been banned in America to protect them. Guess which one.” Although the gun seems to be the more dangerous of the two items, the book has been banned in at least two California school districts, while gun control laws remain lax. This ad gives an intriguing perspective on where our priorities lie when it comes to protecting children.