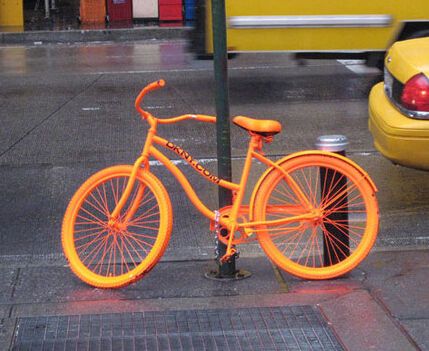 The bikes, which were seen chained to poles around the city, were great attention grabbers with their electric colouring. In addition to scattering them around around town, bike maps were given out at DKNY's Madison Ave and SoHo stores. Each BMX was coated entirely with the vibrant paint with the only contrast being the black DKNY.COM labeling printed on the bar connecting the handle bars and seat.

To follow up on a past feature, the $12,000 Chanel bicycle which was picked up by Courtney Cox for her friend Jennifer Aniston. "Jennifer said she wanted to start bike riding because it's such good exercise. So Courteney sent her the new, ultra-chic Chanel bicycle," a source told SFGate.
Check it out: