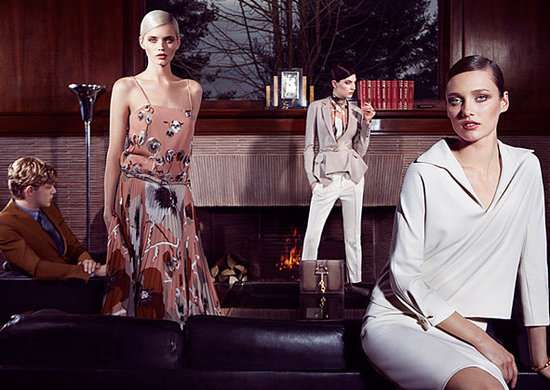 Jordy E — June 3, 2012 — Pop Culture
References: gucci & thingsilike-rotex.blogspot
Share on Facebook Share on Twitter Share on LinkedIn Share on Pinterest
The Gucci Pre-Fall 2012 campaign takes the brands most loyal enthusiasts on to a tour of an old aristocratic home. Models Abbey Lee Kershaw, Karmen Pedaru and Jacquelyn Jablonski stand out amid book cases and leather-clad furnishing, all the while gazing straight ahead at the camera.

There is something discernibly haunting about this Gucci campaign. The beautiful faces of the supermodels contrast with fireplaces and mirrored table tops, the exact fixtures that one would find in a vintage murder mystery film. The women moreover appear to be plotting, and while the crux of their plot remains unknown, one can only imagine what may be lurking behind this haute couture set.

These Gucci advertisements were captured by photography duo Mert & Marcus who effortlessly displayed the genius that is the label's shoes, bags, skirts and trench coats.