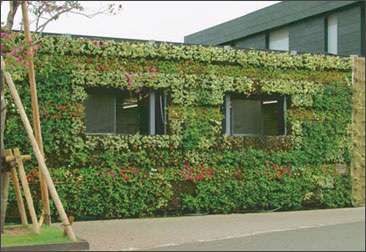 Several North American cities have been putting forth efforts to improve environmental conditions and promote a greener environment. One method has been installing green roofs which involves covering city rooftops with plants.

The plant-covered surfaces reduce heating and air conditioning costs by ten per cent or more. The also reduce rainwater runoff, carbon emissions and have been proven to counteract higher city temperatures.

The â€œurban heat island effectâ€ is a new discovery attributes heat-absorbing city surfaces for raising air temperatures by up to 8 degrees in comparison to surrounding areas.

The U.S. is seeing its green roofs grow by 125 per cent each year. An astounding 2.5 million square feet of Chicago's downtown roofs are covered in plants.

For $100 per square foot, a Vancouver company, G-Sky is ready to take it to the next level, offering green walls as well as green roofs. They're willing to cover any vertical surface. Current clients include Whole Foods, Vancouver International Airport and W Hotels.