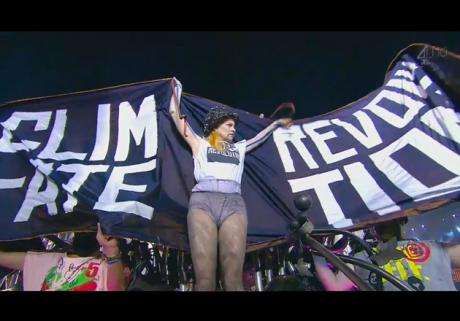 Believe it or not, fashion seems to be turning green, and her recent collection was distinct with earth tones, monochromatic style and red colors. The articles, of course, also had the Westwood edginess, though relatively tame compared to her past designs. In the spring-summer collection London runway, Westwood appeared as a flaming redhead sporting a moustache, reminiscent of Dadaist Mona Lisa, and a circle around her eye.

She recently appeared at the London Paralympics calling for more responsible actions, and also also released ten practical steps to climate revolution. She has appeared in a video for the Prince's Rainforest Project and talked about saving the rainforests.

Implications - With more and more fashion celebrities moving towards more environmentally responsible projects, one expects that the fashion market will take the same direction so businesses are better off investing in greener materials and manufacturing processes as soon as possible.
2.6
Score
Popularity
Activity
Freshness
Attend Future Festival