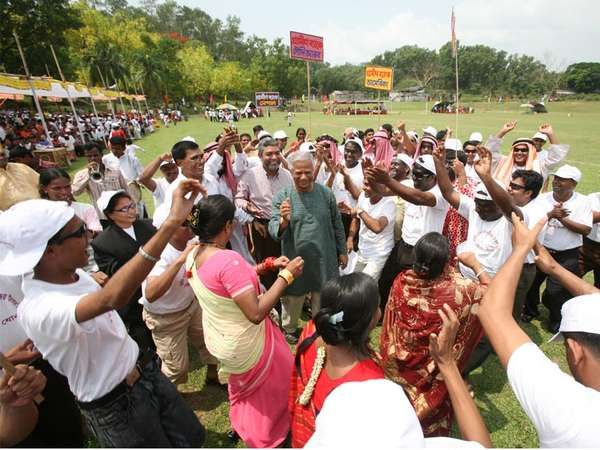 Grameen Bank started out as a research project at the University of Chittagong in 1976 and gained status as a formal bank in 1983 thanks to a special law passed specifically for its creation. What makes GB different, aside from its female target market and small loan strategy, is that there is no legal stipulation between the bank and the borrowers in order to ensure payment. Instead, GB allows borrowers to reschedule loan payments without any hassle or guilt. What’s more, with a philosophy called “16 Decisions,” Grameen Bank impacts the lives of their clients more than just financially. “16 Decisions” encourages health, social and educational change including tree-planting, clean drinking water, child education, no dowry and sanitary latrines.

Grameen Bank’s unconventional approach targets poor women specifically in order to give them the ability to bring themselves and their families out of poverty. Their credit programs start from the idea that the poor have under-utilized skills and that poverty is not self-created, but rather a condition that was created by unfair systems, institutions and policies.

The vast majority of Grameen Bank’s borrowers are poor women, but include those are illiterate, and other disadvantaged groups. Contrary to traditional banks, all borrowers have an immense role in the livelihood of the bank itself. The people of Bangladesh who borrow from the bank own 90 percent of its shared, while the other 10 percent is owned by the government.

Charity is not the solution to the elimination of poverty. The Managing Director and founder of Grameen bank, Professor Muhammad Yunus, addresses the immense possibilities with microcredit: “These millions of small people with their millions of small pursuits can add up to create the biggest development wonder.”