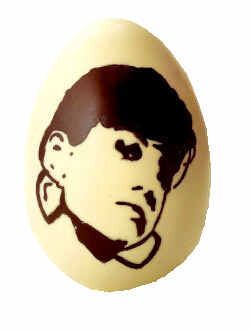 They have created five Easter eggs bearing the faces of Gordon Brown, Victoria Beckham, David Beckham, Lily Allen and Prince Harry. These people were chosen as they "represent a spectrum of British culture." Yeah, yeah but we are just talking about chocolate eggs with famous people's faces on here, folks!

They did however get some pretty awesome people to do their eggs as it were:

Predictably E Bay is involved (YAWN) and the eggs will be auctioned for charity. Quite why anyone would want to eat Gordon Brown's face is beyond me though.
2.8
Score
Popularity
Activity
Freshness
Jeremy Gutsche Keynote Speaker