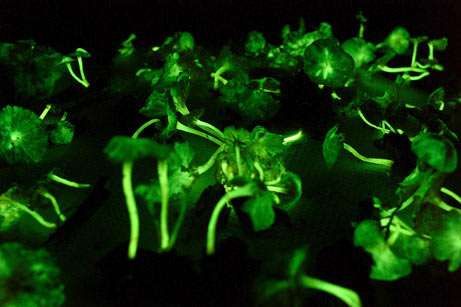 Cool Hunter — October 28, 2006 — Science
References: news.nationalgeographic
Share on Facebook Share on Twitter Share on LinkedIn Share on Pinterest
National Geographic has found a group of bioluminescent fungi, "The mushrooms are part of the genus Mycena, a group that includes about 500 species worldwide. Of these only 33 are known to be bioluminescentâ€”capable of producing light through a chemical reaction." The mushrooms were found in the Ribeira Valley Tourist State Park which is SÃ£o Paulo, Brazil.

Implications - There's no trickery here, because the mushrooms really are bioluminescent, which means they have the ability to produce light via chemical reactions. These are part of the genus Mycena, which is a group that has about 500 species worldwide. Not all of them vibrantly light up in the dark because only 33 are known to be bioluminescent.