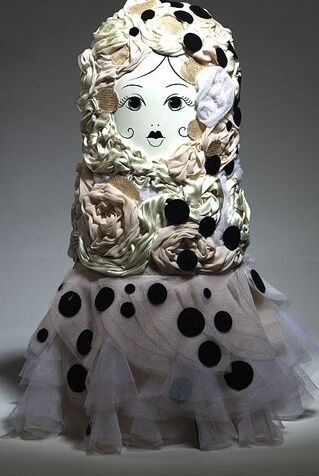 Sandra Winn — November 12, 2008 — Art & Design
References: vogue.ru & vogue
Share on Facebook Share on Twitter Share on LinkedIn Share on Pinterest
Just in time for the Christmas season and in honor of Vogue Russia’s 10th Anniversary, a few big name designers glammed up and slimmed down traditional Matrioshka Russian Dolls with Vogue couture. They will be auctioned off at what Vogue deems a “super-chic party” on November 20th for charity.

Considering that fashion designers for Vogue Russia’s Matrioshka Russian Dolls include Oscar de la Renta, J. Mende, Miuccia Prada, Giles Deacon, and Ralph Loren, just to mention a few, are the names behind the dolls, the charity should receive quite a generous donation.

After the designs for Vogue Russia’s Matrioshka Russian Dolls were handed in, they were carved and hand-painted by skilled Russian craftsmen. All of the dolls are stunning and intricately detailed, donning killer clothes, accessories, make-up, and hair fashions.

It was extremely hard to choose which Vogue Russia Matrioshka Russian Dolls to showcase here out of the 31 presented. The 10 provided in the gallery are my personal favorites with the first, designed by Antonio Marras, being my ultimate fave.

Pity I won’t be able to attend the super-chic party. Oh well, I’d probably get kicked out for playing with them anyway, I love unstacking Matrioshka dolls almost as much as popping bubble wrap.
4.6
Score
Popularity
Activity
Freshness
Attend Future Festival