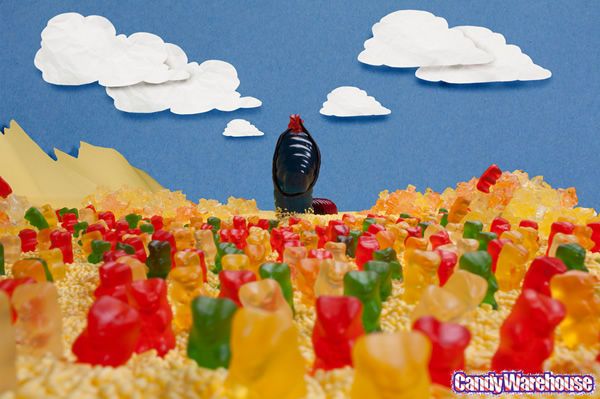 Meghan Young — July 21, 2014 — Lifestyle
References: blogndywarehouse & neatorama
Share on Facebook Share on Twitter Share on LinkedIn Share on Pinterest
The colorful and giant gummy Dune diorama may be made with sci-fi fans of author Frank Herbert in mind, yet it will attract other people as well. Made entirely made out of candy and paper, people into tiny models as well as those with a serious sweet tooth will gravitate towards it as well.

Created by CandyWarehouse, the giant gummy Dune diorama is specifically crafted out of a 2-foot-long gummy worm, Haribo gummy bears, black licorice string, yellow sprinkles and rock candy crystals. The playful creators write, "Here we see the giant gummy worm on the desert planet of Arrakis. Ridden by the powerful gummy bear Paul Atreides as he seeks to control the prescious "spice" melange, which gives those who ingest it extended life and some prescient awareness. Muad'Dib!"
4.3
Score
Popularity
Activity
Freshness
Get Trend Hunter Dashboard