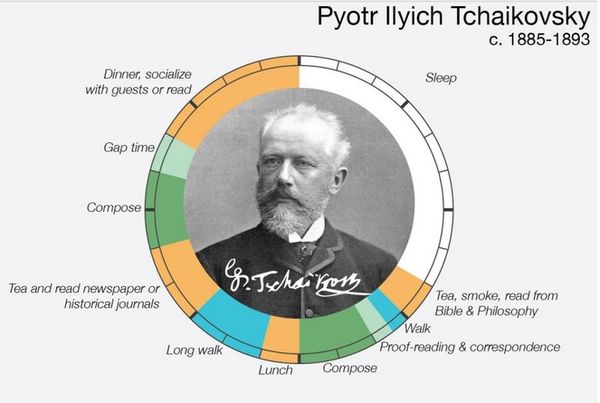 This Geniuses Chart Explains How They Spent Their Days

Jennifer Paul — April 16, 2014 — Pop Culture
References: infowetrust & buzzfeed
The geniuses chart was created by RJ Andrews and the project breaks down the work patterns of a number of geniuses. The charts showcase geniuses like Pyotr Illyich Tchaikovsky, Charles Darwin, Charles Dickens, Maya Angelou, Sigmund Freud, Wolfgang Amadeus Mozart and many more. You can see specifically what they spent more time doing during their days than others.

Designed in the geniuses chart is sleep, eating and their daily routine. For example, Charles Dickens spent a lot of his time being social and eating. He also spent a majority of his days on his primary work. He didn’t spend much of his time doing physical activities but he did sleep regularly.

The one thing that is in common with the majority of the geniuses charts are the fact that it doesn’t seem like any one of them sacrificed their sleep in order to work better and faster. This is something interesting to note since we all seem to sacrifice sleep for other priorities.